San Francisco Giants President and CEO Larry Baer apparently wanted his phone and his wife refused to give it to him. His entire action was devoted to getting his phone. Her entire action was to deny him access to his phone. She is the one gyrating in the seat and flailing her arms to keep the phone away as he continues to try to get his phone.

Her flailing arms changed positions which caused her weight and balance to shift on the seat. Even as she was falling he was still looking to get his phone. Normally a person who wanted to harm someone or assault them would focus on the person. Yes, the video looks bad, but study it closely and see that the case CANNOT be made that he threw her to the ground.

There is the issue of speculating what caused the drama. Assuming his wife was trying to find something on his phone that he did not want her to see, he still had the right to get his phone back. Or... was he trying to find something on her phone that she did not want him to see? (the second scenario would change everything of course and it could be viewed as assault, although, if someone was involved with one's wife, the husband would want to know who it was so they could see if they could be in danger).

There is something ironic about Major League Baseball probably not even using their own Instant Replay Department to evaluate what actually happened. I don't believe she was thrown to the ground, I think the drama of two people in complete opposition to each other is the real issue here.

Changing this to a domestic violence issue changes the truth of the situation, who owns what, and what is somebody  allowed to do to get their property back before information is revealed that the alleged aggressor possibly did not want revealed.

Visit my LinkedIn page to learn more.
Posted by Alessandro Machi at 12:54 PM

The Imperfect Game Bobble from June 02, 2010, Cleveland vs Detroit.

Even if you think Jason Donald was out at first, at least doesn't it make sense from Umpire Jim Joyce's point of view (about 14 to 20 feet away inside the right field foul line) that Joyce would have seen Galarraga not firmly containing the ball within the glove while Galarraga was also in motion the entire time? Full Analysis with critical freeze frame evidence explains in painful detail all the little things that made it look like Galarraga might have been bobbling the ball from Jim Joyce's Vantage Point, and can be found by clicking here.

Jim Joyce Safe Call in the Imperfect Game between Detroit and Cleveland on June 02, 2010 might have been the Correct Call.

This is a quick link to the GIF that shows the final moment of the out that wasn't, or the safe call that was in the Imperfect Game of ... 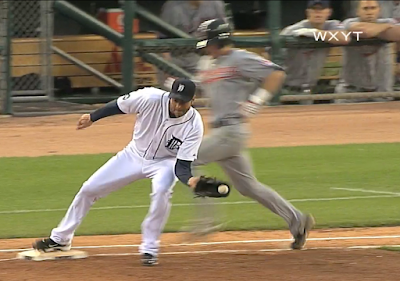